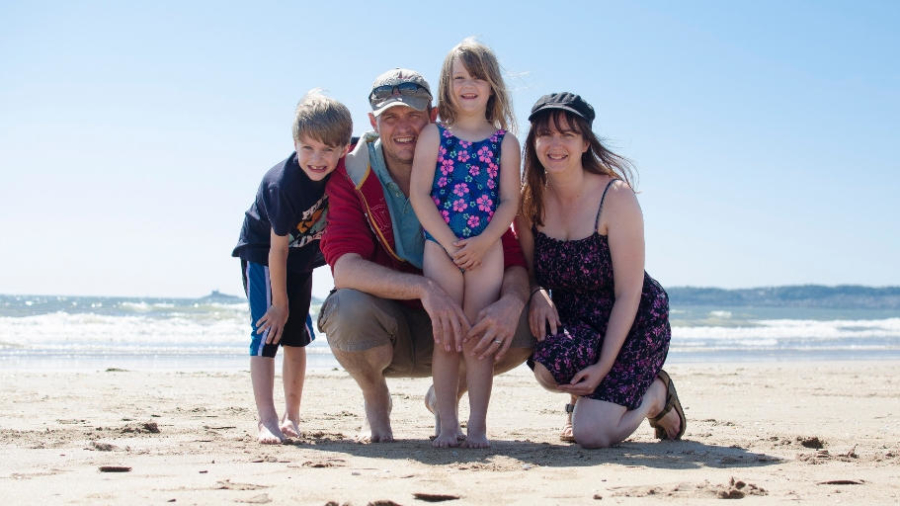 So here we are.  The end of August and very nearly the end of the summer holidays.

Things have worked out quite nicely this year with Steve being off work for the last week, so we’ve had loads of time together as a family.  In typical Swansea fashion the weather has been all over the place, so we’ve sort of let that dictate what we got up to each day.

On one of the more overcast days last week we popped over to Penllergare woods for a wander.

I’d never been before and was really curious to go and explore a bit.  It was so beautiful.  We must’ve spent about 2 hours walking there, and there is still a huge area of the woodland that we didn’t get to.

We found a beautiful spot by the water to take a few family photos.  It was so peaceful there, it would make a great place to sit down for a picnic if we go again another day.

To balance out the greyer days last week we also had a few gloriously sunny and hot days.

We debated heading out to Gower but in the end decided that half of Swansea would have the same idea, with it being a sunny long weekend.  So we stayed local and headed down to Swansea bay 3 days in a row.

I think we made the right decision, especially after we found out that people were queuing for an hour to pay for parking at some of the beaches on Gower!

The first day we went down I took the camera with me to take some photos of the children, and to get this family photo too. The other 2 times we went down I left the camera at home and actually went swimming in the sea too.

I am so, so pleased that I decided to do it.

The children thought it was brilliant that we were all swimming in the sea together, and I loved being in the water with them.  Even though there were some really chilly spots in the water as we swam around!  We’ve actually talked about getting wetsuits at some point so we can all swim in the sea at other times of the year, which I know the children would love.

Now we’re wrapping up the summer holidays and I think, in general, it’s been a good one this year.

We’ve not been away anywhere, but I think living where we do we don’t really need to go away on holiday.  We’re so lucky with the beaches so nearby.

There have been days at home, trips to museums and art galleries, crafts and parks, beach visits, time spent with family and one random night spent in a tent in our living room.

I wonder how long it’ll take us all to readjust to the routine of the new school year.

I don’t feel entirely prepared for it if I’m honest.  I don’t even know which classrooms the children will be in this year, so wish me luck getting them both in on time on Tuesday!