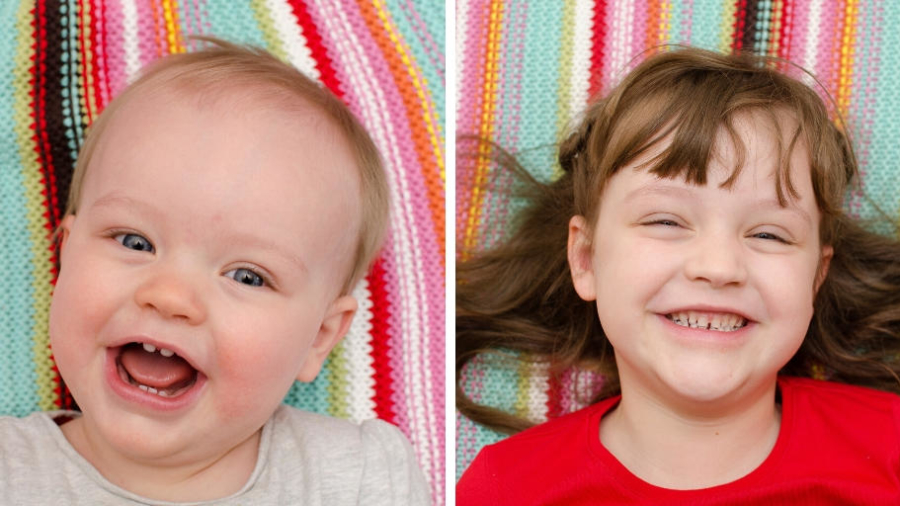 The children’s school has an inset day today which, as it turns out, is quite good timing because they both seem to have come out with colds over the weekend.

We all had a busy week last week with the children back to school after half term and Nerys celebrating her 6th birthday.

At the weekend I got her to lie down on her baby blanket for me to take this photo, carrying on a tradition that I started when she was a month old. For the first year of her life we took photos on this blanket every month.  I didn’t think to do it again when she turned 2, but each year after that around her birthday we’ve been taking these photos.

I wonder how many years we can keep doing this for!  I’d love to see these as a photo montage when she turns 18! As part of her birthday present from her Nana and Pops Nerys went to Joshua’s hairdressers in Mumbles to have her hair done with Nana one day after school.

She was a bit worried about it the night before because we looked at lots of photos and she couldn’t decide what she wanted to have done.  I told her that the people at Joshua’s would be able to help her choose something, and that is exactly what happened.

She was beaming when she got home; thrilled with her sparkly, heart-shaped style. The girl who did her hair gave her some tips for keeping the plaits in place overnight and they still looked amazing for school the next day.  Actually, they were still looking amazing for her party on Saturday so she has definitely had her money’s worth out of them!

We had a party for her at home again this year and, luckily, it went really smoothly.

We did some temporary tattoos when the girls first arrived, then they did a scavenger hunt that I’d set up around the house.  The clues were all based around Frozen song lyrics and led them all around the house, ending with little blue bracelets that I’d made for each of them.

I can’t take too much credit though, I got all the clues for the Frozen scavenger hunt here after a quick google for Frozen party ideas!  That is actually my top tip for you – if you’re planning a party at home and have a theme, then just google ‘theme party printables’ and chances are you’ll find all sorts of things you can print out for games, activities and decorations for the party.

We also found some Frozen spot the difference pictures and colouring in sheets that we printed off and the girls sat and happily played with those for 20 minutes while I sorted out some party food.

Between all that, a game of pass the parcel and the singing of happy birthday and blowing out of candles the 2 hours of the party flew by.

I still can’t quite believe how calm it all was though, the last time this group of girls were at a party together they were wild!  They’re such a lovely little group of girls though, and I love seeing them together and watching their friendships develop.

And now I’m here with a 6 year old, and a nearly 9 year old and I can’t quite make sense of where the years have gone.

I so clearly remember sitting in our old flat almost 10 years ago, squinting at a pregnancy test and the feeling of overwhelming excitement when I saw that faint line appearing.  It feels like yesterday and a lifetime ago at the same time.

Anyone else feel the same about the time passing with their children?!