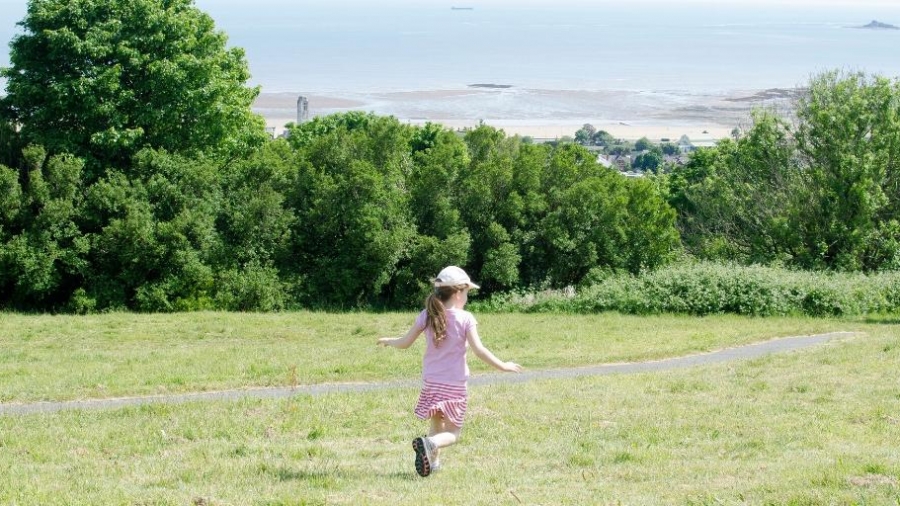 by This glorious life
with 9 comments
Personal

It was so lovely last week to have a break from trying to balance school work and work work, all from home.  And now here we are again, back to it.

The half term break was a bit different from how it would normally have been, but I think the children still had a good time and they definitely enjoyed the chance to relax and not have to do any school work.

We weren’t able to do any of the things we would normally have done in the holidays, like visit the local library, play at the park, visit the gower or pop into town and go swimming.  But with it being warm and sunny all week long we were at least still able to get out and have some fun in the fresh air.

At the start of the week we walked up to this spot with amazing views across Swansea bay.

We were all ready for a sit down by the time we got up there, but within a few minutes the children were off again, throwing their hats like frisbees and chasing after them. Nerys also found a little notebook and a pen in the backpack we took with us and drew a picture of the meridian tower while we were up there.

Both the children have really been enjoying drawing lately, and I love seeing their different styles starting to emerge.  We’re really aware that they’re spending more time in front of screens at the moment, so we’ve been making a point of getting them to sit and draw instead for a while each day and they both really enjoy it.

They’ve also been reading more over the past few weeks too.

Rhys has discovered Harry Potter recently and had worked his way through the first 3 books in the series, so I bought him the next 2 to dive into.  I’d forgotten quite how much longer the books get as you get further into the series!

Nerys has really come on in leaps and bounds with her reading too.  A family near us had put a pile of books out on their wall last week that they didn’t want any more so we picked up a few from the fairy animals of misty wood series that Nerys liked the look of.

She started reading one by herself at the weekend and really impressed me and Steve with how well she was doing with it.

We did spend more time at home than we normally would during the half term break, but ventured out for a scoot in the park one afternoon.  Steve also walked the children up to his parents’ house to pick up some food and give me a blissful hour or so in the house by myself.

And we even had our first proper paddle in the sea of the year which was just amazing.

Hopefully this warm weather will stick around a little bit longer so we can pop down again and make the most of living where we do.  We’re still being asked to stay local and close to home here in Wales and we’re really lucky to have so many lovely places we can go for a walk while following that rule.