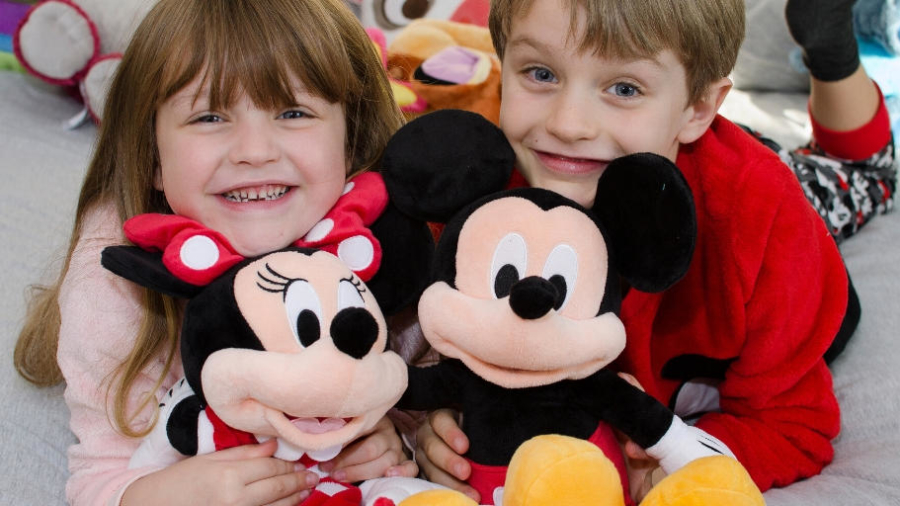 by This glorious life
with 4 comments
Family lifeReviews

We were sent these items from shopDisney as gifts, however all words, photos and opinions are my own.

A rather exciting box arrived at my house last week while the children were at school.

The picture of Mickey Mouse on the outside gave me a hint that it might be some gifts for the children from shopDisney who had been in touch to see if we would like to review some soft toys and a few other special items.

When I opened the box I couldn’t help smiling as the words “Twas the night before Christmas when all through the house, not a creature was stirring, not even a mouse” were written on one of the inside edges.  I just thought it was such a lovely touch!

The box was full of soft toys from some of the children’s favourite films, as well as beautifully soft pyjamas and cushions for them. It all started with Mickey and Minnie Mouse.

They had a great time on their way to see us, exploring the beaches of Gower and stopping a few times to take in the views. The Gower Peninsula was chosen as the very first Area of Outstanding Natural Beauty in the UK and Mickey and Minnie loved how peaceful it was at this time of year.

Although they may have had to pop into a cave to shelter from a rain storm at one point during their beach visit! While they were busy enjoying the Gower, the other toys were making their way to our house through the local parks.

Stitch made a stop off at the playpark in Brynmill for a swing and a slide before the local children arrived. Across the other side of the park Nemo swam through the lake before jumping out to find a way to get to the house with the others.

He had a great time in the water there, swimming with the ducks and the other fish. As the toys were busy travelling across Swansea we got a strange feeling that something funny was going on.

When we were out in the park we thought we saw movement now and then, but couldn’t quite catch sight of anything.  Rhys even stopped a few times to peek behind us and around bushes trying to catch a glimpse, and he thought he may have seen a little deer at one point. Turns out it may have been Bambi that he spotted, as she enjoyed spending a bit of time in nature on her way to visit us. As all the toys got closer to our house, ready to enjoy a slumber party with the children, Lotso took the lead to make sure the coast was clear for them all to sneak in.

He quietly led them all up the steps and into the house. While we were out the toys snuck into the bedroom and got all cosy ready for a fun slumber party with Rhys and Nerys.

They even left them each a pair of cosy pyjamas downstairs as a clue that something exciting was going on.

When we came home the children were thrilled to spot their new pjs, and put them straight on before running upstairs to see what was waiting for them.  They were so excited when they stuck their heads round the bedroom door and saw what the toys had organised. The children piled on the bed with the toys and the fun really started. The children had great fun telling the toys how much they loved their new pyjamas.

Rhys has a pair of Mickey Mouse pjs, with a cosy fleecy top and soft cotton trousers. Rhys is 8 but is a bit shorter than average for his age, so these pyjamas in age 7-8 are a really lovely fit for him.

There’s a bit of room to grow still, while still being really snuggly and cosy. They’re a little big on her, but that just makes them look even cuter.  And I love the fact that they should last her for next winter too, as they’re so fleecy and warm which is perfect in the colder months. These Minnie Mouse pjs are so soft, and they’re fleecy on the inside too so they feel really nice on her skin.

The soft pink colour is really pretty too and Nerys has worn them loads since she first got them.

She really loves the fact that they have Minnie Mouse on them, and she spent ages cuddling her Minnie Mouse plush toy during the slumber party the toys had arranged. Lotso also got shown a lot of love, even though he’s a not the nicest of characters in Toy Story!

This plush toy is unbelievably soft and the perfect size for cuddles.  The best part though is that he really does smell of strawberries – I would love to fall asleep cuddling up to a sweet smelling teddy like this!

Along with the cosy pyjamas the toys also brought some beautifully soft cushions for the children.

There is a Pua cushion that Nerys grabbed straight away and declared her favourite, as well as one designed to look like one of the aliens from Toy Story which Rhys really loved.

The best part about these cushions though, is that they open up into blankets.  They’re £15 at shopDisney which I think is really reasonable.  They feel so soft and great quality and would be a lovely present for anyone who likes to cwtch up on the sofa and watch Disney films.  I have a feeling we’ll get a lot of use out of ours doing just that this winter! Rhys and Nerys are both thrilled with all the gorgeous things that the lovely people at shopDisney sent us.  The soft toys are all a brilliant size for cuddling either on the sofa or at bedtime, and they are all such great quality.

I’ve been browsing shopDisney.co.uk and they have got a huge range of toys on there, featuring everyone’s favourite characters.  And it’s not just Disney characters either, there are loads of toys from Pixar, Marvel and Star Wars too so there really is something for everyone.

If you have a little movie fan to buy for this Christmas then shopDisney is definitely worth a visit.  Actually it’s worth a look for the grown up Disney fans in your life too.  I spotted loads of mugs I’d like to add to my collection and there are all sorts of bowls and plates and dishes on there to add so much fun to mealtimes.

Are your family all Disney fans?

Which soft toy would your child most like to come to your house for a slumber party?!

Disclosure: We were sent these items from shopDisney as gifts, however all words, photos and opinions are my own.