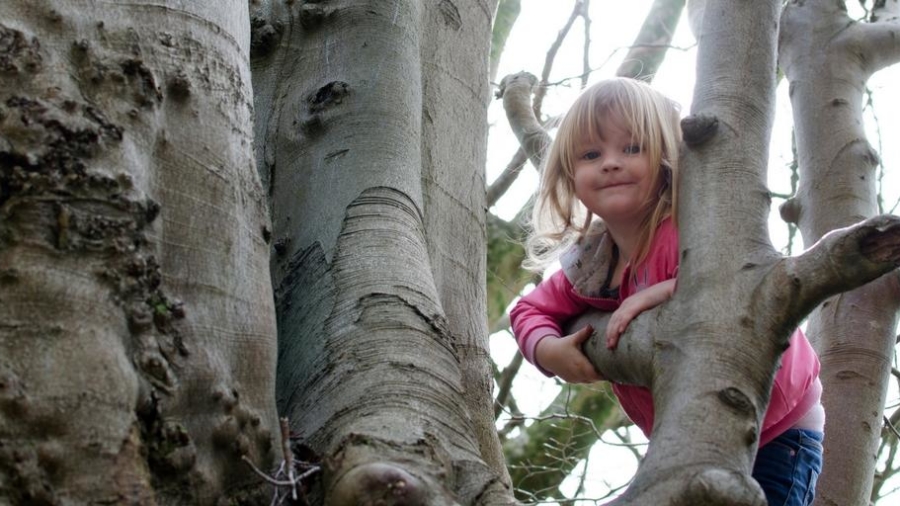 by This glorious life
with 2 comments
Parenting

Just outside my parents’ house is a little grassy area that, being triangular in shape, we always called ‘the triangle’.

Incredibly creative name aside, what I remember most about the triangle is the time we spent climbing the 3 trees that grew on it.  I can still climb the easiest of them in my mind.  If I close my eyes I can feel the smooth bark under my hands as I grip the lowest branch.  Then walk my legs up the trunk of the tree and hook my right foot over another branch and swing myself up.

I must’ve climbed that tree a thousand times growing up.

The other trees were a bit harder, and I’m not sure I ever really mastered them.  But I did try.  And I scrammed my knees and scraped my hands in the process.  That’s just part and parcel of being a child isn’t it? If you believed everything you read online then you would think that my generation was the last one to spend their childhoods outside.

We, the children of the 80s, were the last ones to experience a ‘real’ childhood of climbing trees, building dens and generally just exploring the outside world.  Children these days are always stuck inside, in front of the tv or the ipad.

Well, I’m not sure that’s entirely accurate.  Times have changed, there’s no disputing that.  Our children do have access to a huge amount of technology.  My children definitely watch more tv than I did when I was their age.

But they also still go and play outside. We go to the woods and they dig in the mud, try to skim stones and collect the best sticks they can find.

We take them to the beach and they jump in the waves, and they build trenches and dams, and investigate rock pools.

We visit the park and they feed the ducks, they learn about different types of flowers and they climb trees.

And yes, they scram their knees.

At any given time one or the other of them will have a cut or graze or bruise somewhere on them.

They come home from school filthy some days after playing in the dell at break time.  And while it can be frustrating to have to put another load of washing on, just when the basket was almost empty, I think it’s a really good thing that they are out, getting filthy, and sometimes even getting hurt.

It all means they’re learning.

They are investigating the world around them.

Pushing themselves physically to see what their little bodies are capable of. A study carried out by the University of Essex found that playing outside for just 5 minutes really improves mental wellbeing and self-esteem, especially in younger children.

So, even though my instinct is to keep them close and protect them from harm, I let my children explore the world around them.

I try to stand back a bit and give them that sense of freedom to run and jump and climb.

All with the knowledge that I’ll be there to make it all better when they do fall and hurt themselves.

That’s part of our job as parents isn’t it.  To make things better.  To turn tears into smiles.

My first course of action is to give them a big hug.  For as long as they need.  I will always try and let them be the first ones to let go, when they’re ready.

I reassure them that they’re ok, but I let them cry if they need to.

And, once they’re calm, a plaster generally helps make them feel better! She discovered the boxes of Frozen and Star wars plasters we were sent for this post and has ‘needed’ to have one on a few occasions lately.  Even her baby doll was sporting an Elsa plaster on her foot the other day. Elastaoplast have been getting really creative with their mission to turn tears into smiles recently.

Take a look at this video they made, featuring the beautiful artwork of Lorraine Loots.

But they often say that distraction is a good method for making children feel better when they hurt themselves, and this is such a lovely gentle way of distracting them.

While none of us want our children to get hurt, I really do think that letting them explore the world and see what they’re capable of (or not as the case may be) is far better than wrapping them up in cotton wool.

How do you help your children feel better after they, inevitably, fall and hurt themselves when playing outside?

This post is an entry for the BritMums #TearsintoSmiles Challenge, sponsored by Elastoplast.