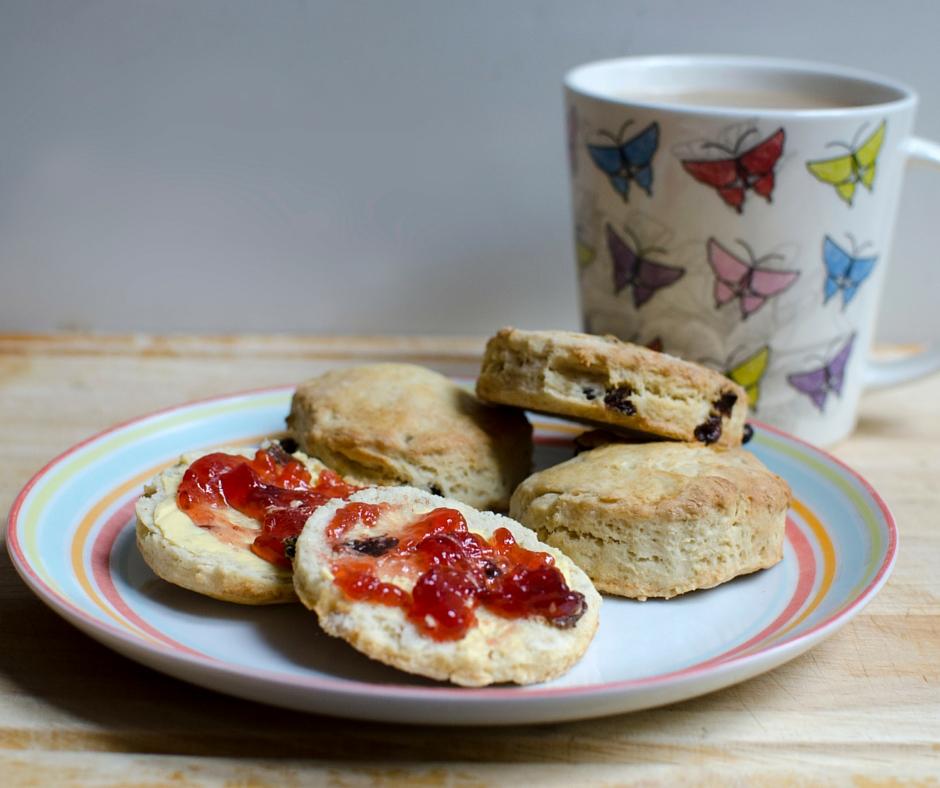 by This glorious life
with 2 comments
RecipesUncategorized

In the middle of a wet and windy week, what could be better than baking some simple all-butter scones?  Baking them with your toddler that’s what!

My husband’s been nagging me for ages to make some scones and so Nerys and I decided to spend a rainy day at home baking. I have to admit that the resulting scones aren’t quite as tall as they would normally be, but I know that’s down to a few factors, including me running out of self-raising flour and clearly not adding enough baking powder to my plain flour.

Nerys had such a great time mixing these up with me though, so I really don’t mind that the end result wasn’t perfect!

I just love baking with my children, knowing that they’re learning so much while having fun. Nerys really was my little helper the whole time making these, weighing everything out with me, mixing it all together and even brushing the tops with milk at the end.

She actually surprised me with that last one, because she really was gentle with the brush rather than just squishing the scones with it which is what I kind of expected her to do! It was so hard to resist these when they came out of the oven, but I made myself wait till they’d cooled a little before spreading one with some butter and jam, so good!

If you’d like to have a go yourself, here’s the recipe for these simple all-butter scones:

Here’s what you need to do:

One of the important factors in making great scones is using proper butter, nice and cold from the fridge, and rubbing it quickly into the flour so that it doesn’t melt too much.  When the scones bake, the butter then melts, creating steam which adds more oomph to your end result!

I think this might be another factor in why mine were a little flat, because I had so much help from Nerys the mixture was handled a little more than it should have been!  But, she had great fun and they still taste really good.

We used the newly rebranded Wyke farms butter in our scones, and then used some more to spread on top with some jam, so yummy! Wyke farm have put a lot of thought into the look of their butter, and I think it looks great; it really celebrates Wyke farm’s British heritage with images of Prince the farm horse, the Somerset compass and the iconic oak tree that sits on top the hill outside the dairy at Wyke Champflower on it, as well as highlighting its credentials with the 100% Green logo and the Red Tractor stamp of assurance.

The butter looks really high quality, and the taste lives up to expectations.  It’s great to use in baking, and just perfect on warm scones with jam!

It’s been a while since we’ve had ‘proper’ butter at home and now I’m wondering why I stopped buying it!  Our poor neglected butter dish has now been retrieved from the cupboard though, and my morning toast is just so much tastier – you really can’t beat real butter can you!

I received some Wyke farms butter for the purposes of writing this post, but all words and opinions are my own.