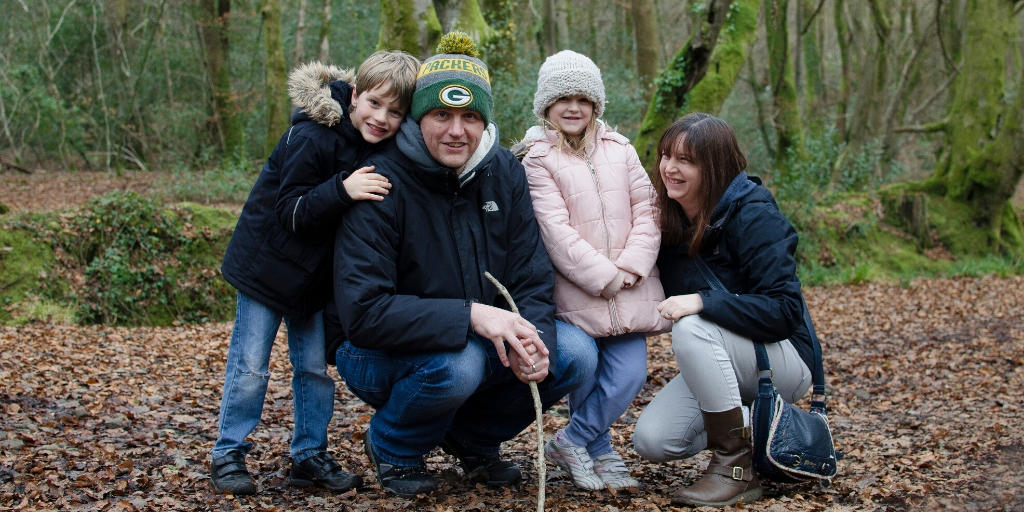 November has been a bit of a funny old month for us, mainly spent juggling germs.

I had one week where Nerys was home from school one day and had to be picked up early on two more days because she was unwell.  Then the next week Rhys caught another virus that seems to be doing the rounds so we had a few days of him needing to come home from school early too.

All of which meant that I was all out of sync with the days and not knowing if I was coming or going.

It has made me so grateful though, to be able to work around the children.  To be able to stop what I’m doing and take care of them whenever they need me.

Touch wood as we reach the end of the month both children seem to be feeling pretty well again.

Our family photo for this month was taken earlier today on a walk in Clyne woods.

With the illnesses and wet weather over the last few weeks we’ve not had many opportunities for family pictures so I was so happy we were all feeling well enough to head out for a walk and to take these. I am quite pleased in a way that we were forced to slow things down in November because December is likely to be quite busy.

It still feels a bit early to me but the Christmas season kicks off for us next week with Nerys’ Christmas concert at school.  Then Rhys has got his the week after.  I have to admit, I’m really looking forward to both of them.

The children and the teachers always work so hard and the concerts are always so much fun to watch.

The next few weeks will also include going to pick a Christmas tree, then digging out the decorations for it when it’s delivered.

I’m also hoping to meet up with my sister for a day out shopping, and possibly taking the children to see Frozen 2 too.  Then we’ll be almost at the end of term and ready for the madness of Christmas with the children’s cousins over from the Isle of Man.

I’ve been fighting feeling festive so far, it just feels too early to me to be getting all Christmassy in November but I’ve learnt from previous years not to fight it too hard because then I end up not feeling festive at all!

So with December here I think I’ll start letting it in.

We’ll put up our tree, get some fairy lights up in the house and I’ll start slipping some baileys into my coffee in the evenings.

Are you feeling festive already or are you holding out a little bit longer?