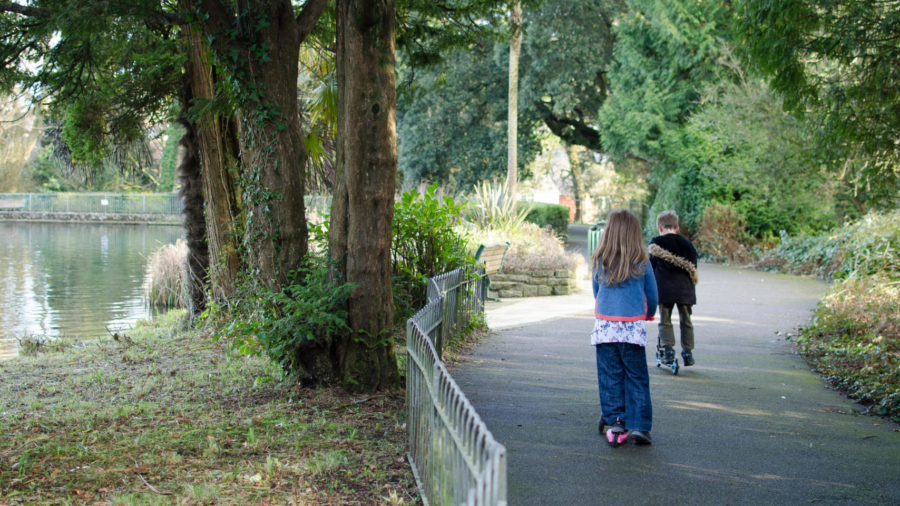 After all the excitement of Nerys’ birthday and her party last weekend, an inset day on Monday was just what the children needed.

We had a slow start to the day, then baked enough fairy cakes for Nerys to take in to school the next day for the others in her class.  I don’t think we’ve ever taken cakes into school before, for either of the children’s birthdays, but Nerys was insistent that she wanted to do it this year.

So we baked over 30 cakes and then Rhys and Nerys had a great time completely covering them in a variety of sprinkles.

The sun had been shining pretty much all day, so by late afternoon we decided to grab scooters and pop down to Brynmill park for a play, before meeting Steve after work to all come home together. We haven’t taken the scooters out with us for ages, and Rhys was so happy when the muscle memory kicked in and he could easily whizz off on his.  It’s taken a while for him to find his balance and his confidence with it, so it was amazing to see him jump on and look so at ease on it.

Nerys also had a great confidence boost when she went down the fireman’s pole.

This pole has been something they’ve both had issues with on and off for years, and Nerys was so proud of herself last week for just going for it and sliding down. After so many weeks of stormy weather, this trip out to the park last Monday in the sunshine was just lovely.

It felt like spring might actually not be too far away, with Nerys even taking her coat off for most of the time we were out. This week now is a big one for Rhys, because he’s off on a 2 night residential trip with his school.

I am unbelievably proud of how he’s been about it.

I know he was nervous but he’s been shifting his focus on to feeling excited about it as well, which is what Steve taught him to do when he went away for 1 night last year.  So he’s been thinking about all the fun activities they’ll be doing, rather than worrying about being away from home.

He’ll have an absolutely amazing time, I’m sure, and I can’t wait for him to come back and tell us all about it!