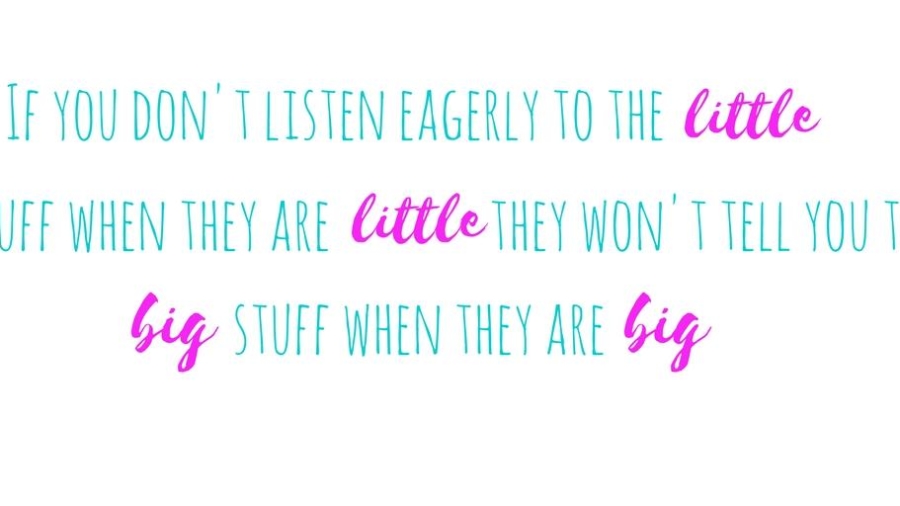 by This glorious life
with 3 comments
ParentingQuotesUncategorized

Rhys is a talker.

Some days it feels like all he does is talk.  He’ll talk to himself as he’s playing, and he’ll talk to us at every possible opportunity.

Some days I long for a few moments of quiet.

Some days I don’t really want to hear about Minecraft or Roblox or Pokemon.

There are times when I have to ask him to please, just hush for a bit.  Just give me 5 minutes of quiet.

And then I feel bad.  I feel awful asking my son to stop talking.

It is my job to listen to him.  To at least try to be interested in the things he cares about.

But I am so aware that I need to listen more.  And to listen with interest.

I need to listen now to the things that matter to him.  Because I need him to know that he can talk to me and that I will hear him.

As he gets older I want him to be able to open up to me.  To tell me what’s on his mind.  To discuss his hopes and fears and dreams with me.

If listening to his endless chatter about Minecraft now means he’ll talk to me about the big issues when he’s older, then surely it’s worth it.

I just need to remember that it’s also ok to take breaks every now and then, even if it’s just leaving the room to put the washing on, or make a cup of tea.  Just to relish the quiet for a second!