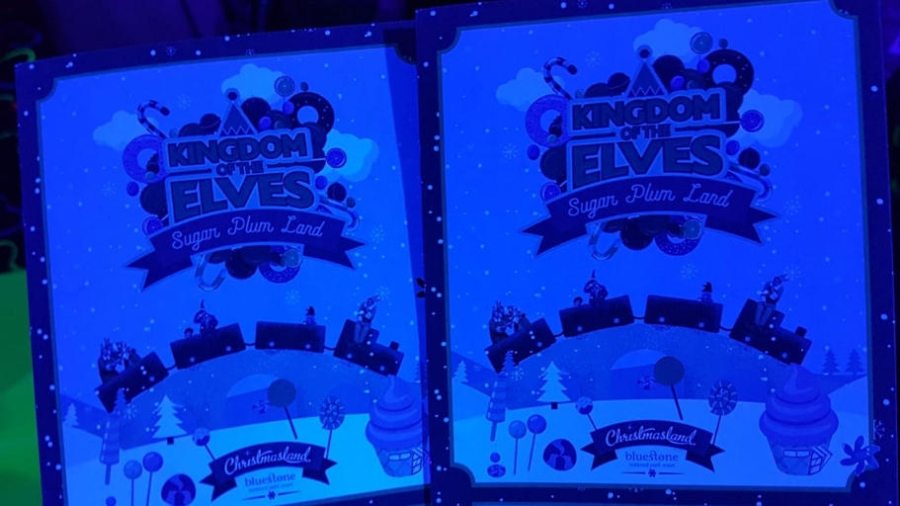 by This glorious life
with no comment
Family lifeReviews

Ever since our holiday to Bluestone in May 2017 the children have been asking, on a regular basis, when we were going to go back.

We all had such an amazing time that I was just as keen as they were to go for another break there.  Having been to Bluestone in the summer before though, we really liked the idea of going in the winter to see how different an experience it would be.

If you’ve never been before though, you might not really know what I’m talking about.  So keep reading to find out all about our adventure to Elftopia. The Kingdom of the Elves takes place in the adventure centre at Bluestone so it’s really easy to find.

As soon as we walked through the main door at the adventure centre we knew we were in the right place.  There were Christmas trees and piles of presents just inside the doors, perfect for a quick photo opportunity. Once we got into the reception area we were greeted straight away by a friendly elf asking if we were off to the Kingdom of the Elves.  He took our names, gave the children their special passports and told us where we needed to go to get started.

We made our way round and were led through with the rest of our group to the ticket master to get the children’s passports stamped.

Then we moved through to the first stage of the journey.

Another elf came along and filled us in on what we would be getting up to.  He told us that the Elf King had been turned into a nutcracker toy by the Mouse King, and we needed to take him back to Sugar Plum Land to break the curse and turn him back. The children were all given really lovely elf outfits to put on (and keep) and then they had little rosy cheeks painted on.

Well, lots of the other children in the group did this while Rhys and Nerys both got really shy and refused to get dressed up.  So I carried their outfits for them, hoping they might decide to wear them another time.

Honestly, we weren’t really sure how well the whole experience would go at this point as both the children seemed so unwilling to join in.  Luckily they warmed up relatively quickly and did get stuck in, and I was relieved to see some other children in the group didn’t put their elf outfits on either so we weren’t the only ones!

Once everyone was ready we were taken on to the train to head off to Elftopia.

The train journey to the Kingdom of the Elves was great fun and really well done.  The seats sort of vibrated slightly, in a way that made it feel like we were actually moving, and there was a big screen on the wall that looked like a window, showing us the landscape we were riding through.

I was sat on the end of a row of seats, right next to the conductor and felt like I was in the front row at a comedy club at times.  A dad-joke comedy club, in the best possible way.  I heard so many puns on that journey and they were all brilliant.

At one point the train started flying and we went through some clouds.  We went past cloud 9, and a few other funny ones that I can’t remember off the top of my head.  The one that did really tickle me though was Jean Cloud Van Damme.

By the end of the train journey Rhys and Nerys were feeling more relaxed and had started to enjoy themselves which was a big relief.

We got off the train and headed into Mother Ginger’s kitchen.

Mother Ginger told us that the children would need their energy to battle the mice in the next part of the journey, so they were given some gingerbread men to decorate and eat. Mother Ginger was helped by Marshall Mallow and they were both brilliant and really engaging for the children. Once the children had all finished with their gingerbread men the lights were changed to blue light for a bit which we all really enjoyed.

It was great fun to look around and realise how many different things were glowing, including all the paintings on the wall and the special passports. From Mother Ginger’s kitchen we made our way to a beautiful garden to meet the Sugar Plum Fairy.

It must take ages to put together the rooms in the Kingdom of the Elves, the attention to detail is brilliant and the creativity and artwork is amazing.

The Sugar Plum Fairy herself was just perfect.  She really looked the part and the way she spoke was soft and sweet and just right for a fairy.  She told us that this was the point where the children must battle the mouse army (the adults) to be able to save the King.

Nerys was a bit nervous about joining in, but Rhys jumped straight in to make sure the children won.  We had to rush around putting balls into a big watering can on the wall, and to be honest the adults didn’t stand a chance against the determined children! The next challenge was a little mini golf game, where we were pitted against the children again to get as many balls in the hole as possible.

It was great fun, and I think every child and every adult did join in and give it a go which was lovely. Once the competition was over and the mice had conceded defeat, we all went through to the final part of the kingdom.

I think I may have genuinely ‘oooohhed’ when I walked into this room.  It just looked so pretty, full of fairy lights and with stars hanging from the mirrored ceiling. As we walked in we were greeted by the Elf Queen who thanked us for bringing the King back to her.

Then she placed the nutcracker in special room where he magically changed back into the Elf King.

Nerys in particular was amazed when he walked into the ball, and I loved seeing how solid her believe in the magic of it all was.  After thanking us all for saving him, the King and Queen then signed all the children’s passports for them. The whole event ended with a little disco, with a fun dance routine led by the king and queen.

Rhys got in the spirit of things by flossing and Nerys had a bit of a boogie too, while I just enjoyed watching the king and queen bust out some cool moves! We had an absolutely brilliant time at the Kingdom of the Elves, I really can’t fault it at all.

I was a bit worried that it might not live up to the expectations that I had after hearing all my friends rave about it but, honestly, if anything it was even better than I expected.

The cast were amazing and didn’t break character once which, considering how many times a day they must do this, was really impressive and really made the experience something special.

If you’ve been thinking about visiting Bluestone around Christmastime I would definitely say go for it!

We all came away feeling so festive and the whole Kingdom of the Elves experience was just magical and absolutely lived up to the high expectations we had for it.

Disclosure – We were given a four night stay at Bluestone, including tickets to the Kingdom of the Elves, for the purpose of this review, but all words and opinions are my own.